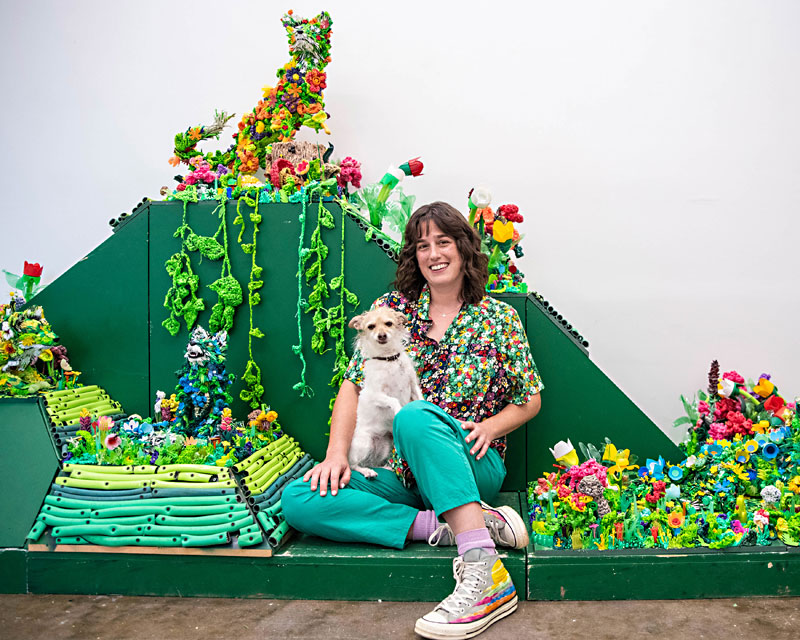 Calder Kamin would like you to send him your old plastic bags. The creative reuse crusader, known for turning trash into art, crochet the toughest critters with plastic yarn. His intricate animal sculptures are composed entirely of discarded contraptions, pen caps and play pieces with “plann” skins.

In “A World Without Waste”, his solo exhibition at Ivester Contemporary, Kamin presents 11 works – an assortment of canines with a family of foxes – and a Superartificial desert installed on the floor of the gallery. His luminous menagerie of colorful creatures has similar titles: Worry bastard, Puppy Plant, and Wildflower wolf. (Its affinity for alliteration comes from having its own catchy name.)

But beneath the playfulness hides something serious: is our planet becoming its own plastic skin? I had the chance to talk with Kamin about “A World Without Waste” and the different hats she wears as an artist, activist and now, amenity. The 36-year-old Austin native is currently an artist in residence at a multi-family apartment complex in Fort. Value. (This interview has been edited for clarity and length.)

Austin Chronicle: You describe yourself as an artist, educator and advocate. What role do you identify with the most?

Calder Kamin: I am an artist overall. We see the world differently and see the potential of things when others don’t. There is a long legacy of artists using found objects and waste to create their work. I have always loved the ingenuity of Ruth Asawa; she is known for her wire hanging sculptures, but I had no idea she was the mother of creative reuse centers in San Francisco! When her children were of school age, she started an art program and asked parents to donate materials. She worked with several other artists in the Bay Area to make it official. They’re all over the United States now, and that’s Asawa’s legacy. Austin Creative Reuse is a beacon for me. I joined their board in May 2020, to champion the potential of these materials and ourselves – to understand this difficult future that lies ahead. It’s not just for artists with a capital “A”; there are so many brilliant creators in Austin, and I want them to have a platform through ACR.

CA: You make all kinds of critters: Do you have a favorite?

CK: Dogs – canines – are my favorite for sculpting. They are omnivorous, and because they eat our waste, that’s how the whole human-wolf relationship began.

CA: Speaking of which, is your Pixel pooch more of a role model or a muse? 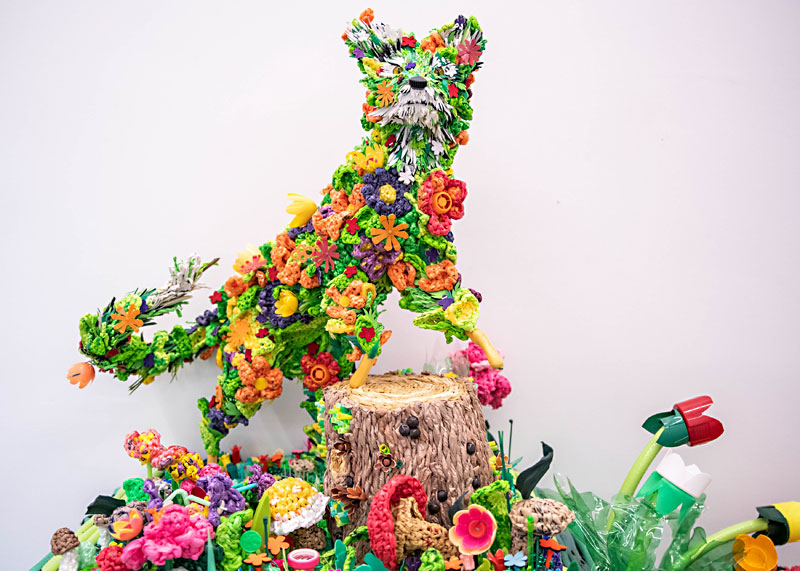 CK: She’s a good friend. [laughs] She has been to every exhibition installation with me. When I had the exhibit at the DoSeum in San Antonio, she was there with me until 2 a.m. every night. Pixel and I took the children’s museum tour on our own – but she’s not interested in art at all!

CA: You are based in Austin but currently live in Fort. Value?

“Doing this kind of work is definitely my fun inner child. My programming is for all ages, but the reason the emphasis is on kids is that we’ve left a huge mess for them. – Calder Kamin

CK: Yes, I am here until October. It was a total lark, I was scrolling Instagram, following the hashtag #CallForArtists, and a notification popped up for American Landmark Apartments. They were looking for an artist in residence; a week later I received a phone call for their Shelby property in Northside in Fort. Value. They gave me a large studio – it was an old utility closet – as well as an apartment. In exchange for this space, I offer activities for residents. I am technically advertised as a convenience. There is a gym, a swimming pool and now an artist. I still have my job at UT as a guidance counselor. When I graduated from the Kansas City Art Institute in 2009, I knew I wanted to help artists as my daily job. I grew up in Austin; the first place I sold my art was in fifth grade at the Yard Dog Art Gallery. They asked me to make little animals and Elvis in Sculpy [polymer clay]. This was back when Chuy’s was still local and the whole South Congress neighborhood was celebrating Elvis’ birthday. I didn’t know much about him other than that he had big hair, wore rhinestone jackets, and liked donuts – so I made these little busts of big Elvis.

CA: When did you start working with garbage as a medium?

CK: While living in Kansas City, I started birding, and the most interesting behavior I witnessed was a nest made of garbage. To build the architecture of the next generation, I thought, I have to look more like a bird! It was around 2013. Then I came back to Austin in 2014, and there was the citywide ban on plastic bags, which I was very proud of, but it made my gear scarce. It was then that this process of collecting and educating the public really developed. People from all over the United States, old college friends, and Instagram followers have started sending me their trash.

CA: Your animals are so smart and cute! How do you find the balance between adorable and urgent?

CK: I talk to children as if they were adults. The DoSeum asked me to build a world on the future, so I created a time machine. You’ve walked through a spiral entrance, into a dump world with cockroaches everywhere. There was a raccoon trapped in a refrigerator, and a seagull choking on plastic – and a vulture watching the seagull. The other world was a forest where something terrible had happened; a baby fawn stood in the middle. There are no humans in my world: The movement to save the planet is to save humans! We continue to transform and adapt, but we need to be more like nature.

CA: Are your rooms always so colorful?

KC: I organized a workshop at Women & Their Work in 2016, during my show “Plastic Planet”, and a little girl came to me and said: “If your work is about false nature, your animals can be. in all the colors you want. ” So now I have these creatures that are full of the rainbow. Back then I was only using plastic bags, but I started exploring new materials in 2019. Creative reuse centers struggle to get people to use really weird stuff – I’m the one. spokesperson for that! Koozies are one of my most coveted materials. All I use is a hook needle, hot glue gun, and thread pliers. Doing this kind of work is definitely my fun inner child. My programming is for all ages, but the reason the emphasis is on kids is because we’ve left a huge mess for them.

CA: So what is the plan?

CK: Plastic bag wire. My orange bags come from a customer in Omaha. My blue bags are New York Times sleeves. I use fruit bags, grocery bags, and newspaper pockets and roll them up like a burrito to cut strips – full circles – and lace the circles into each other to make ties for my yarn. . Some people have built more complex contraptions, to create a smooth continuous line, but mine are a bit bigger and softer. The crochet plan passes over a foam mold; for the most part I can only find taxidermy forms on eBay. But the Floral Fox Kits in this show, for example, there is only a bunch of yarn, foam, and duct tape.

CA: How long does it take to make each animal?

CK: It’s months of preparing all the components, starting with collecting the materials. I’m someone with busy hands whether I’m in the studio or not, so I’m always doing something. I carry a handbag with plannings everywhere I go. My studio has tons of bins for crochet stuff, plastic flowers, cutout marker caps, and tiny little things. I made a 17ft whale for the Austin Public Library and it took me two years – I had to wait for the ban on plastic bags to be lifted. My coworkers commuting from Kyle or Manor filled my desk drawer with them.

CA: What is the main message of “A world without waste”?

KC: Nature will continue to thrive, with or without us. 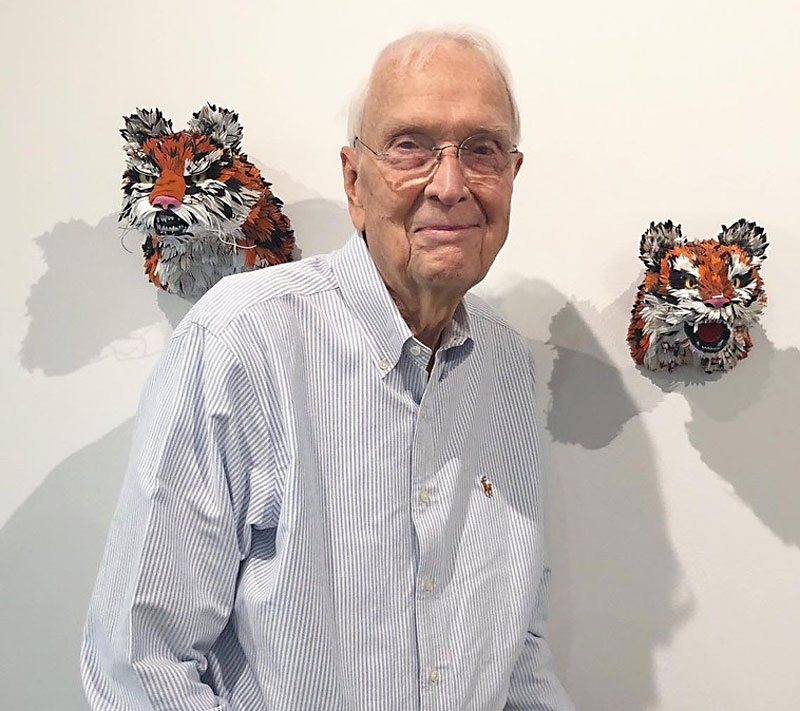 Calder Kamin is not the only member of his family who has an artistic connection with animals. Her grandfather, Jesse Ernest Caesar – to whom she dedicated her solo exhibition “A World Without Waste” – was intimately linked to a tiger: the tiger Exxon. Well, it was originally Esso’s tiger, as the cartoon cat was born a decade before the oil company rebranded itself with the “xx”, but Caesar was there when he was born. He was the senior art director of the Houston office of the legendary advertising agency McCann Erickson (often denounced in Mad Men), which was developing a new campaign for Esso in 1964. “Put a tiger in your tank” was the slogan, and Caesar and his team came up with a tiger that said “power”: a fat bodybuilder with the barrel chest of a cat with thick arms and an irrepressible smile. He immediately caught the public imagination and remained the spokesperson for Exxon for decades.

(Caesar was also at McCann in 1975, when the Houston Astros needed a new look. Although he himself didn’t create the horizontal stripes of the rainbow – it was a young graphic designer named Jack Amuny – he led the uniform design team which caused a parcel controversy. This, however, is another story – but a good story.)

While Kamin was preparing to open “A World Without Waste”, his grandfather passed away. the the Chronicle extend our condolences. – Robert Faires

“A World Without Waste” is on view from July 2 to August 2. 7 at Ivester Contemporary, 916 Springdale # 107. For more information, visit ivestercontemporary.com.

A version of this article appeared in print on July 2, 2021 with the title: Plasticdermia