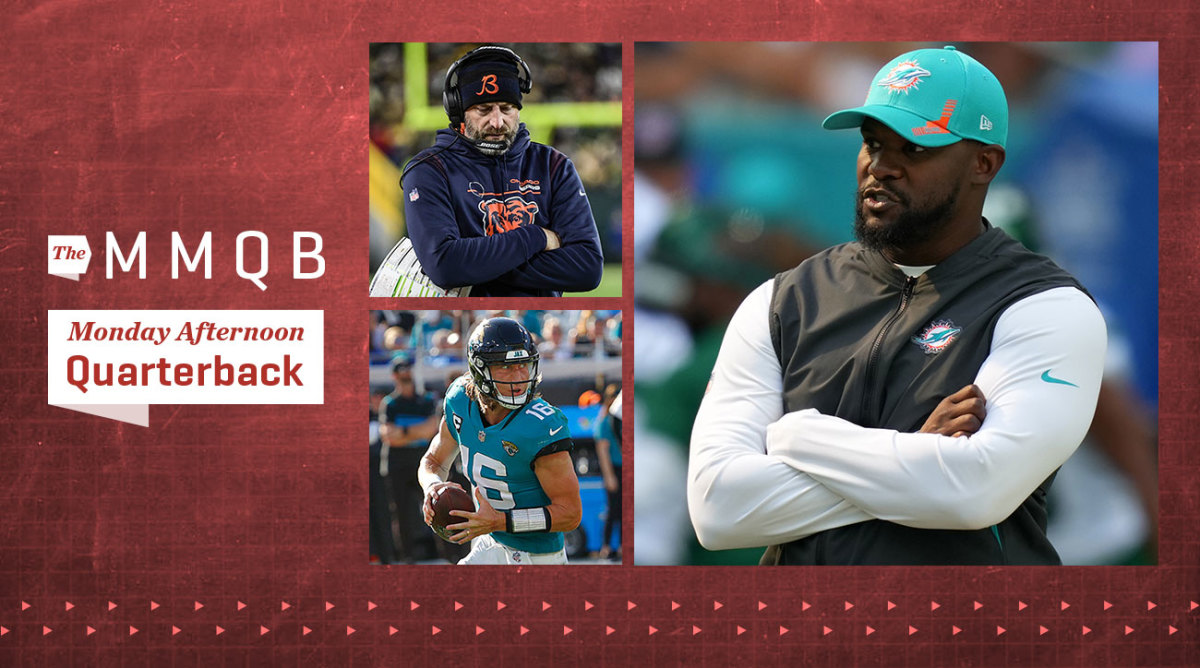 Lots to do, with 18 teams’ seasons over and 14 more preparing for the playoffs…

• Over the past few weeks there had been rumors that the Dolphins might shake up what had become a somewhat dysfunctional setup, but few bet Brian Flores would be the one to bite the bullet. So why did he do it? Well, my feeling is that if organizational alignment was the goal, ownership would look at stability on the scouting side and stability on the coaching side, and make a call from there. In the first instance, CEO Chris Grier worked in the organization for 22 years, and his recruiting team has remained fairly static since he took over the reins three years ago. On the latter, Flores had gone through three offensive coordinators and three offensive line coaches, and had even had multiple offensive callers at times this year (QB coach Charlie Frye handled it early, OC George Godsey later in the season). Now the other side of it? Over the past two years, Flores’ defense has been one of the best in the NFL, and the offensive tinkering was, in part, aimed at overcoming some personnel shortcomings and quarterback Tua Tagovailoa’s shortcomings. So ideally you’d give everyone another year, unless you thought the situation was unworkable, and that’s obviously where Dolphins owner Stephen Ross got to.

I was told communication was scarce over the past few months, and there was a lot Flores and Grier disagreed on, with feelings about the longer-term future with Tagovailoa in part. And that’s where Ross felt the urge to pick sides over the past month, with worrying signs appearing in Sunday’s season finale at Hard Rock Stadium (ex-Dolphins manager Dawn Aponte, now at league office and with a role in identifying the coach and league-wide GM candidates, were at the game; and Flores left the field with Bill Belichick and spent time with his former boss on the goal line near the tunnel, which caught the attention of others), and the result validating what had been illustrated for everyone. Flores leaves with a good record and a good chance of landing a job elsewhere. Obviously, his choice of offensive coordinator, when he gets another shot, would be considered elsewhere, but Flores has accomplished a lot in his three years in South Florida.

• Speaking of second chances, I think former Bears coach Matt Nagy will eventually get his, based on a solid record – he made the playoffs twice in four years in Chicago and didn’t had just one loss record (the Bears got 0.500 twice) – and his team remained engaged throughout what amounted to a coaching death march at the end of the year. It’s fair to look at Nagy and wonder if things had been a bit more stable at quarterback, and if he could have held on to Vic Fangio for over a year, if the end result would have been. been different. As is? Well, I would say if Andy Reid were to step down in the near future, Nagy would be at the top of the Chiefs list to replace him. Nagy, for those who don’t know, was a varsity teammate with Kansas City general manager Brett Veach, and has enjoyed many good relationships within the organization. And obviously, he was on the ground floor for the development of Patrick Mahomes.

• We mentioned this last week, but it’s worth reiterating that teams don’t seem to focus on a specific type of head coach candidate early in the process, and that should be good news for an office. league looking for teams to be more open-minded in how they approach these things (this is believed to help teams consider more diverse candidates). The Broncos (Dan Quinn, Jerod Mayo), Bears (Leslie Frazier) and Jaguars (Quinn, Todd Bowles) have already contacted defensive-minded coaches, as well as guys on the offensive side of the ball. And some college names (Jim Harbaugh from Michigan, Ryan Day from Ohio State, Pat Fitzgerald from Northwestern, Matt Campbell from Iowa State) were discussed, even in the aftermath of the Urban Meyer fire in Jacksonville. . Which is good for long-term teams when making big decisions like these, and good for coaches who don’t necessarily match the offensive tendency of players in recent years.

• While we’re on the subject of diversity, with Flores’ sacking, the NFL is now down to three minority head coaches (Steelers Mike Tomlin, Washington’s Ron Rivera and Texans David Culley). The good news? There are a slew of new names that I think have a chance to gain momentum in the coming weeks, with New England linebacker coach Jerod Mayo the most obvious, and the defensive coordinator of the 49ers DeMeco Ryans and Bucs offensive coordinator Byron Leftwich likely to get good long looks. Add to that a good pool of potential Second Chance candidates (Bowles, Frazier, Vance Joseph, Raheem Morris), and there’s a very healthy pipeline in place.

• The Bears and Vikings’ decisions to clean up, after many league members expected NFC North rivals to maintain their GMs to some extent, could signal greater involvement from the league. from the owners. Recent research for both teams has been done by CEOs and / or team leaders, and as such, changes in these cases have consistently come across as half measures. What Chicago and Minnesota did on Monday opens up the possibility of larger-scale change in both places – and that’s why no one should be surprised that the Bears brought in an experienced NFL executive, in Bill Polian’s person to help guide the process.

• I had a great conversation with Jaguars quarterback Trevor Lawrence on Sunday afternoon, and you can see most of it in the morning column. But there was one thing I left out and that’s how he responded when I asked him how he would rate his own performance during his first season in the NFL.

“Yeah, I think I need a couple of weeks to do it, to be honest,” he said. “But it’s been a crazy year, something I never imagined. I didn’t think it would go that way. I wouldn’t change it now. I learned a lot. I learned a lot about myself, a lot about football, just about my teammates, all of those things. Right now I’m just happier and more excited for the future, and really proud of this group. But yeah, there’s definitely going to be a lot of thinking over the next couple of weeks because there are some great things this year that I’ve learned that went well, that didn’t go well. I’m really going to take it all and use it.

It’s pretty easy to tell, just by talking to Lawrence, how he was able to navigate an odd start to his NFL career and come out of it playing like he did on Sunday. He’s very, very balanced, something that has shown itself over the past few months as things around him have been getting worse.

• Raiders general manager Mike Mayock isn’t getting much credit for the work he did to build the roster in Las Vegas. Should he? He drafted Josh Jacobs (26 carries, 132 yards Sunday night) in the first round in 2019; got Bryan Edwards, Hunter Renfrow and Foster Moreau in the middle of the rounds; taken Zay Jones from the scrap heap; rebuilds offensive and defensive lines on the fly; and found star passer Maxx Crosby in the fourth round. Yes, he has his hiccups. And of course Clelin Ferrell and Damon Arnette are greats. But for the most part, the Raiders don’t have huge weaknesses and are well positioned for the future without a lot of bad contracts on the ledger. There is merit in staying the course for owner Mark Davis. Of course, Davis’ orientation with the coaching job will likely dictate what happens with Mayock in particular and the GM role in general.

• Part of hiring coaches is knowing that they will be able to build a strong staff, and Nick Sirianni has absolutely been eye-opening in this department with the work he has done in Philly. He was successful in luring defensive coordinator Jonathan Gannon with him – Gannon was one of the most in-demand coordinator candidates in the NFL last year – and relied on his past to nab Shane Steichen as the offensive coordinator of staff at ‘Anthony Lynn, after Lynn was let go by the Chargers. Gannon quickly became a coordinator and is already attracting interest from Denver head coaches. And Steichen has been instrumental in putting together and calling out a brand new racing game to suit Jalen Hurts’ skills. Lesson? Be careful who the new coaches bring with them on their new teams over the next few weeks.

• On this one, I wanted to underline it since a few weeks: the assistants that Josh McDaniels had identified for his staffs during his interviews in Cleveland, Indianapolis and Philadelphia are quite remarkable. McDaniels’ defensive coordinator at Indy was going to be Matt Eberflus, who ended up going to the Cowboys Colts to be DC even after McDaniels decided to stay in New England. Eberflus has been exceptional in this role, good enough to spark the interest of other teams as a head coach. And when McDaniels interviewed in Cleveland two years later, his plan was to have Gannon and now Chargers coach Brandon Staley as defensive co-coordinators. Which also looks very good in a few years. To me, these are the kinds of things that should grab the attention of owners (but they often don’t).

• Give me Alabama Monday night, 30-24. (And for more on watching the game through an NFL lens, be sure to check out the morning column.)

• Takeaways of week 18: Niners Save Season; Jags Ruin Colts
• Near Tie delivers drama as wild season heads to playoffs
• The 17th game, for the first time
• Why Sean Payton should consider leaving the Saints