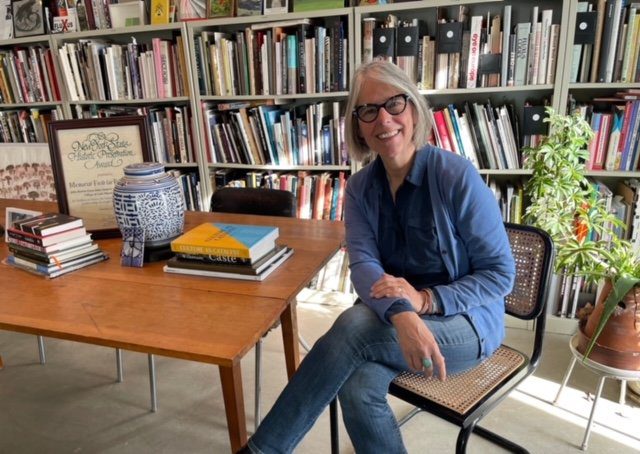 Although she prefers to stay out of the spotlight, graphic designer Karen “Ren” Davidson Seward is well known in the northern arts community for her collaborative spirit, talent and generosity. She has participated in some of the area’s most popular exhibits, including the Wild Center exhibits at Whiteface Mountain, a revision of the exhibit Dreaming of Timbuktu and the Memorial field for black lives to John Brown Historic Farm.

Ren’s workspace at Lake Flower Landing is filled with art books, unique architectural lighting, and comfy furniture. Its style is bright, eclectic and contemporary. The building housing Lake Flower Landing was renovated by Ren and her husband Peter Seward from its earlier use as a taxidermy workshop. With high ceilings and windows overlooking stunning views of beautiful Flower Lake, it also serves as a venue for concerts, film screenings, and lectures.

Ren has been surrounded by art and dynamic mentors since her childhood in Chicago. Her mother Barbara was an interior designer who relied on ingenuity to help friends and neighbors transform their homes. Ren’s father, Don, held executive positions in two of America’s most popular women’s magazines, Ladies House Journal and Women’s day. While Ms. Magazine was not yet born, Don encouraged his daughters to be independent, faithfully observing “Take Your Daughter to Work” every year. He was also able to tell his daughters about his own day at the office, when on March 18, 1970, Gloria Steinem and 100 other women staged a sit-in at the Diary of the house for ladies, with its 14 million monthly readers, calling for a change in the way the magazine portrays women.

Her own path to becoming an artist, who understood the power of imagery to encourage social change, included some exciting stops along the way. As a young student, Ren spent a semester at sea at World Campus Afloat, taking lessons from her uncle, a professional painter from the Midwest. Later, she worked in a prestigious gallery in San Francisco, graduated from the Rhode Island School of Design (RISD), worked in creative promotion for large organizations such as the Revlon Company, then in a gallery in New York, where she was able to expand her professional network. She soon knew she wanted to work for herself, and in 1987 she took the plunge and opened her own graphic design business.

Davidson Design Inc. employed seven employees in New York, contracting with various organizations and institutions to design exhibition brochures and catalogs. For a few years, she consulted with the retail division of the American Museum of Natural History and was able to work with leading scientists and artists to create products for the store and their special exhibits. Ren found that it filled a significant need in the nonprofit world for skilled and creative design and publishing. These are now the same skills and knowledge Ren brings to his work with organizations such as John Brown Lives !, a social justice initiative and the official NYS Friends Group of John Brown Farm State Historic Site. 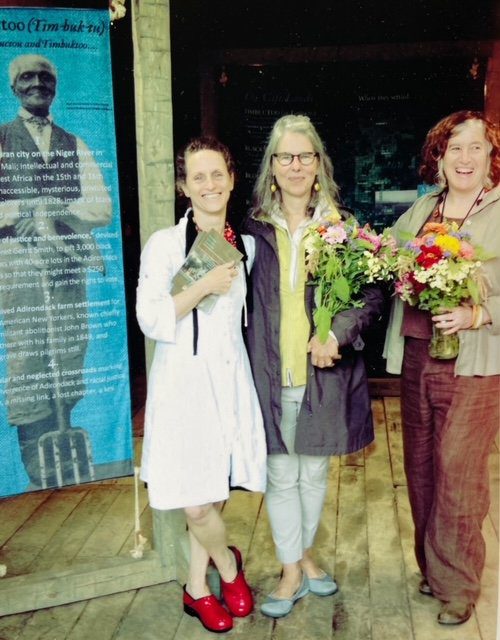 One of his most recent projects was an update of the exhibition Dreaming of Timbuktu written and curated by Adirondack historian Amy Godine. When I asked about her experience working with Ren, Amy first explained that the project came about because she had amassed new information about the history of the Timbuktu initiative since the inception of the original exhibition in 2001 by artist Stephen Horne. “Martha Swan (from John Brown Lives!) Working with Ren on redesigning every panel, working to make sure every caption and image was unique and bright – it was a thrill of collaboration.

While the reason Ren came to the Adirondacks was because of the traumatic events of September 11, Ren later discovered that his connection to the Adirondacks dates back over seven generations. She had been living in New York for almost two decades when she and Peter decided to leave some time after that terrible day. Debris from the Fall of the Towers had landed on his block, and it was impossible to escape the smell in the air. They chose the North Country, where they had spent their vacation, because of its natural restorative properties. The wisdom of the move didn’t come to Ren’s face during the first few years, when she was still unsure if leaving NYC had been a good decision. Surprisingly, it was her research into her family’s genealogy that helped her to anchor herself in the region.

First, she found out that her maternal great-grandfather had actually lived in Ogdensburg, New York. A colorful character, Sam Gebo prospected in the West and then in Guatemala, where he opened coal and marble mines. But it was while researching her father’s family that she learned something deep about her family. Ren’s 6th degree great-grandfather, John Haff, had lived in Peru, New York. He had been a slave owner described in historical records as abusive of a runaway slave. In contrast, Haff’s son Abraham went on to become a well-known abolitionist and co-founder of the Clinton County Anti-Slavery Coalition. John and Abraham are both mentioned in an exhibit at the North Star Underground Railroad Museum in Ausable Falls, located a stone’s throw from Ausable Chasm.

“Despite the surprising amount of information I find about my family dating back to colonial times and the first settlers in a place like Peru, New York, I am unable to identify the man described as a runaway slave. It became a priority of my research to find out more about who he was, his life and what happened to him. Learning about my own very American family saga contributes to my thinking about social issues in ways I had never thought of before. It’s too easy when something is uncomfortable to try to cover it up, to hide it. This tendency was rampant in my family, which prompts me to get to the bottom of it. 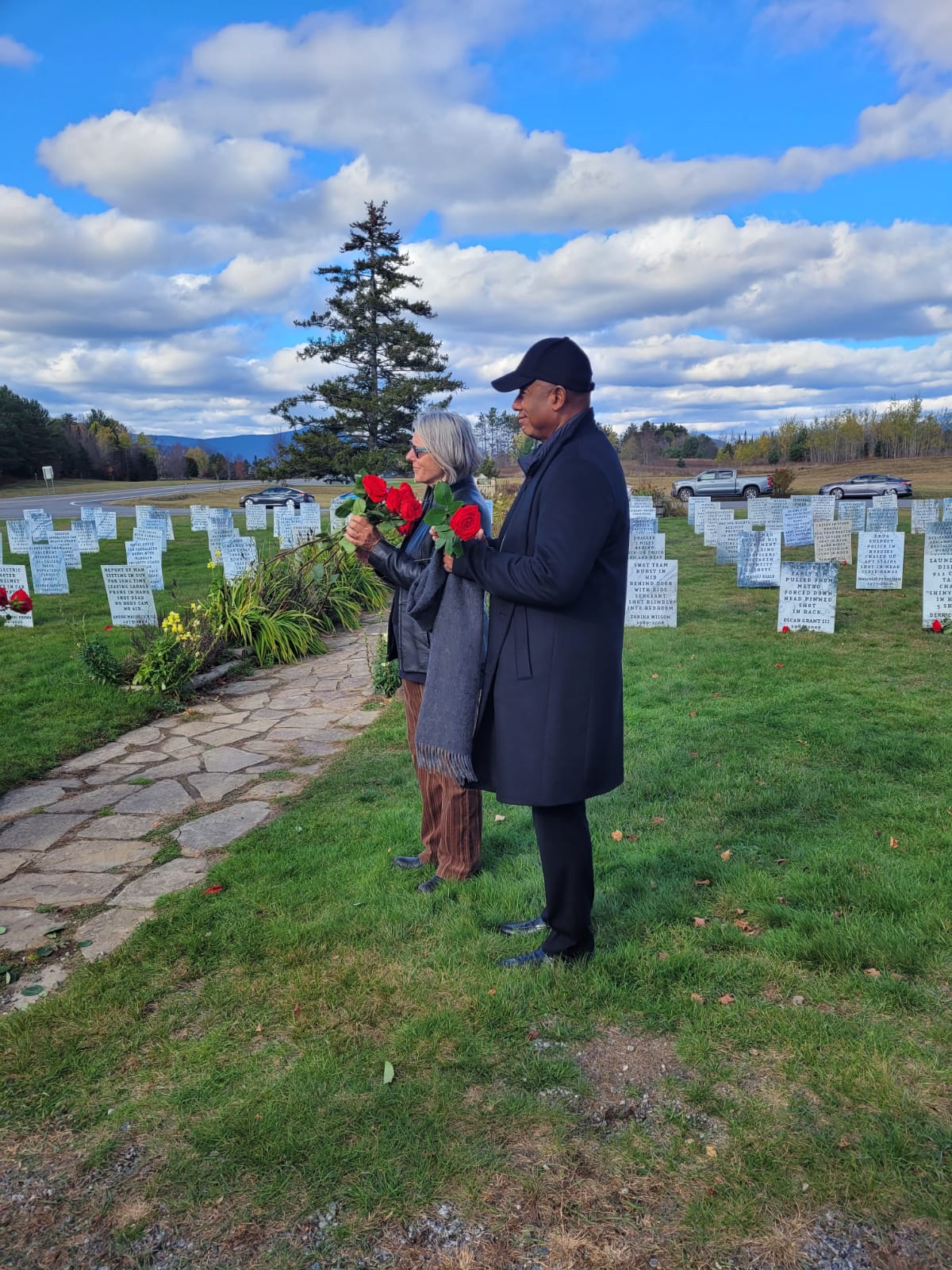 Ren and Raoul Peck at Memorial Field for Black Lives, an exhibit she curated at John Brown Farm. Photo by Linda Friedman Ramirez

Ren and Peter have both collaborated with John Brown Lives! design the JBL! 125th anniversary logo and banner. In 2017, they joined JBL! to host a film screening and a round table of I’m not your nigga, Raoul Peck’s award-winning documentary. Narrated by actor Samuel L. Jackson, “the film explores the history of racism in the United States through Baldwin’s memories of civil rights leaders Medgar Evers, Malcolm X and Martin Luther King Jr., as well as his observations personal stories of American history. “

There was only room for standing that summer evening at Lake Flower Landing. But that night, who could have predicted that in October 2021, filmmaker Peck would come from France to take part in the Lake Placid Film Festival, and at the end of the festival, visit John Brown’s farm and Ren’s exhibition, the Memorial field for black lives.

Although I had been to John Brown Farm a number of times, I only heard of Ren last year when I read that she had received a prestigious New York State award for ” “Excellence in interpreting historic sites and engaging the public” for the Memorial field for black lives. The creation of the facility, which is located at John Brown’s Farm, came during the pandemic, when everyone was glued to the news about Covid-19. As if times couldn’t be much worse, the deaths of Breonna Taylor, Ahmaud Arbery and George Floyd have flooded the news. Overwhelmed by the absurdity of the murders, Ren began to write about each of the deaths. Ultimately, the writings became the source of the text on the tombstones of the Commemorative field. Ren explained to me that the exhibit was not intended as a rebuke to all police officers, but rather to encourage those who visit to feel empathy for the individuals and families who have died in circumstances that most consider to be. tragic and unnecessary.

Interview Ren and learn how she came to create the Commemorative field, a place where I take all my guests in the north of the country, meant a lot to me. It was by chance that I was interviewing Ren on November 24, early in the afternoon at Nori’s in downtown Saranac Lake, when the verdict in the Ahmaud Arbery case was announced. For a long time, but now a retired criminal defense lawyer, I had watched the trial with anxiety. Appreciating the role criminal defense lawyers play in protecting an accused’s due process rights, the scenario and facts surrounding Mr. Arbery’s death still seemed untenable. Ren and I were both relieved to know that the rule of law prevailed that day.

Ren expects to be very busy in 2022, with new plans, including events at the Memorial field for black lives. Also look for Ren’s work at Historic Saranac Lake and the John Brooks Lodge property. Tours to Lake Flower Landing can be taken by appointment.

Find out more about John Brown Lives! go to: https://johnbrownlives.org

Linda Friedman Ramirez is a resident of Saranac Lake. She previously owned an art gallery in St. Petersburg, Florida, and appreciates how much art is part of a community. She contributes to these artist profiles on behalf of ArtWorks, of which she is a member.

View all posts by →