How cool is that? When Hurricane Anyone comes and knocks out the power, forget to light the candles. Simply plug in your new all-electric Ford F-150 Lightning at home.

It looks like the Lightning’s massive battery can power an average-sized home for around three days, and up to 10 days with a bit of power rationing.

Even for less stormy electrical demands, like a day at the beach, the Lightning can power an XXL-sized cooler, industrial-grade fans, air pumps for paddle boards, and a small fleet of electric bikes and scooters. All thanks to its eight 120-volt outlets. 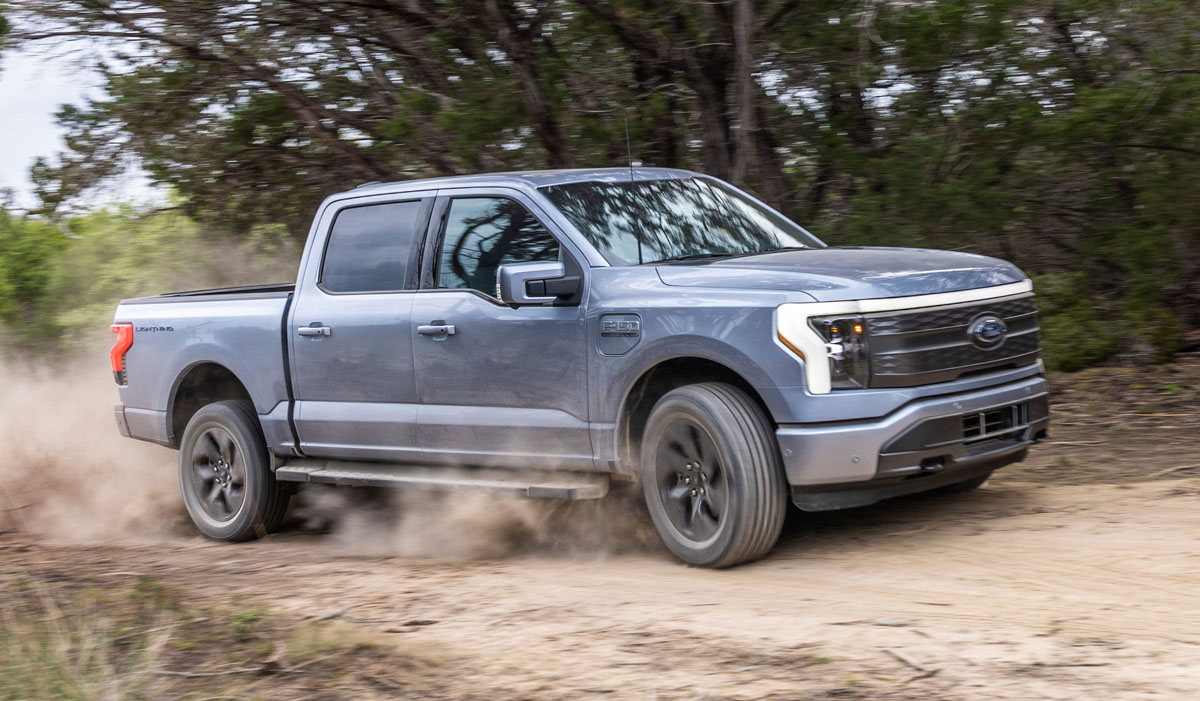 After a week of shooting in a mid-range Lightning Lariat, I’ve decided this is definitely the new must-have accessory for the home.

Why is this new electric Ford so important? The F-150 has been the best-selling vehicle in the United States for the past 45 years. We love F-150s for work or play. And the beauty of this new all-electric Lightning is that it has the familiar looks of a regular F-150, paired with some pretty amazing technology.

And the folks at Ford see the Lightning as a way to convert gas-powered F-150 owners to the zero-emissions social responsibility of electric. And are willing to make it happen even if it means less profit. 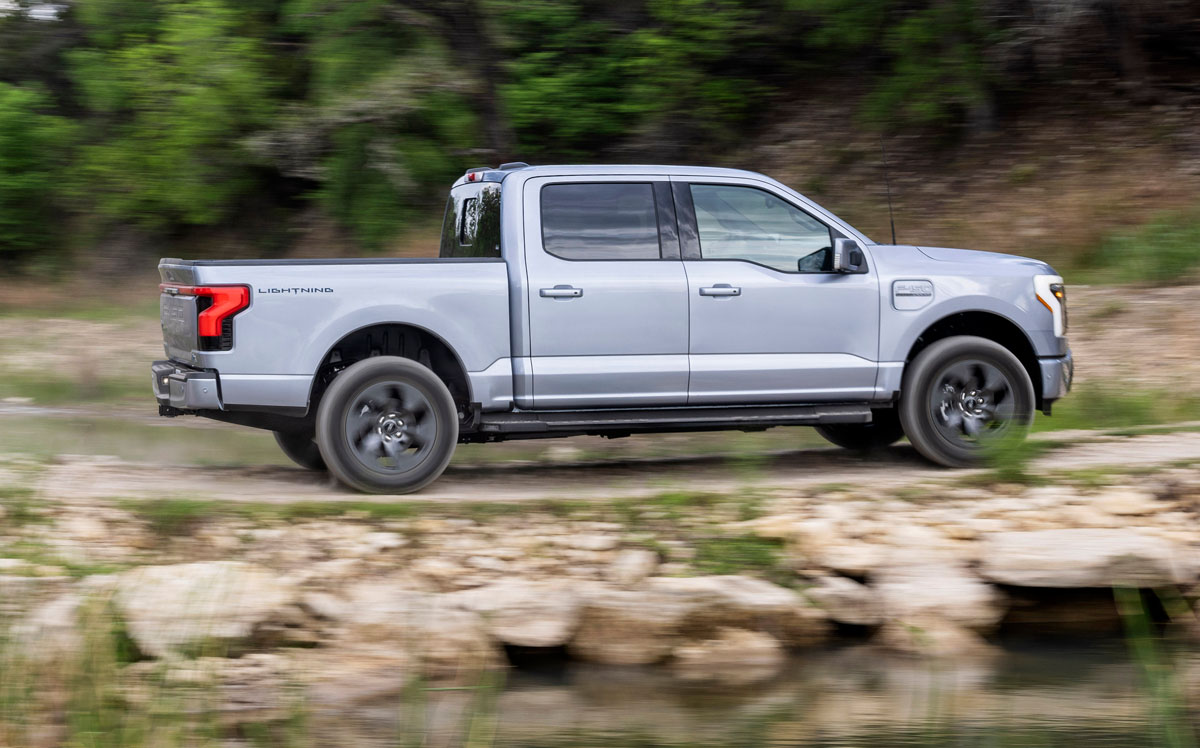 Most buyers will probably want the less commercial XLT which starts at $54,669. The big appeal here is that you have a choice of the standard-range battery or the extended-range version.

Our super-dooper, leather-lined Lariat, with a 15.5-inch vertical touchscreen, power tailgate and dual-pane glass roof, starts at $69,169 or $79,169 with the extended-range battery. 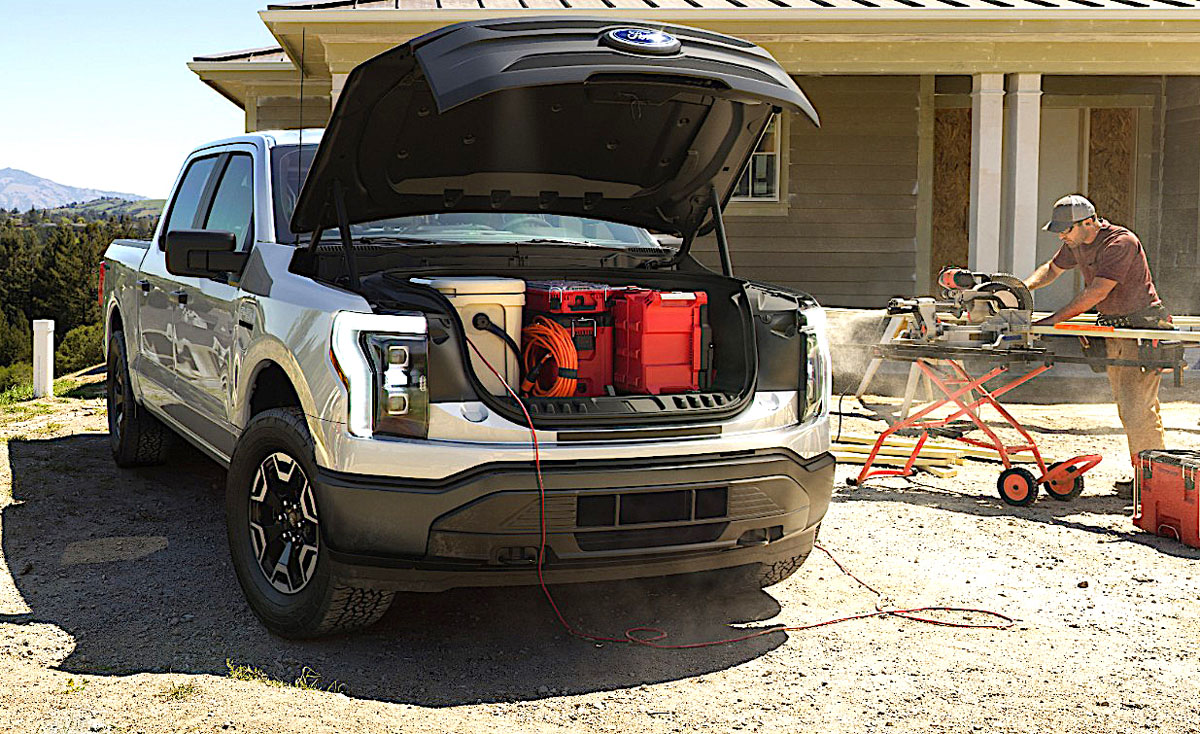 For luxury enthusiasts, the Platinum flagship starts at $92,569, but includes the big battery, plus Nirvana leather, Bang & Olufsen sound and 22-inch alloys.

That’s the good news. Not so good is that Ford received an astonishing 200,000+ reservations for the Lightning, forcing them to close order books for 2022.

Why the overwhelming demand? Just take a five-minute test drive – luckily Ford requires dealers to keep demo models – and, as we say in Merrie Olde England, you’ll be totally gob-smacked. 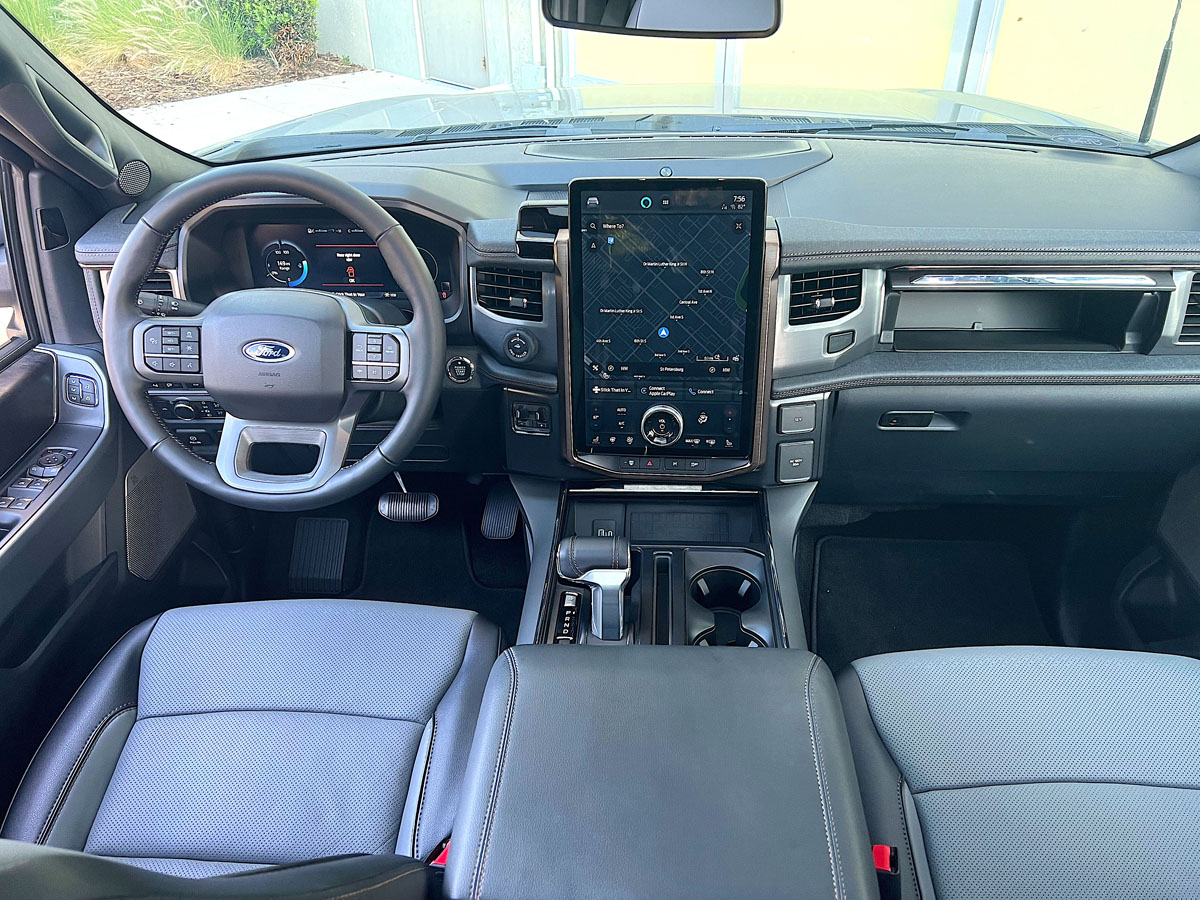 Not only is it incredibly fast, but with low batteries it handles very well, it’s quieter than the inside of a bank vault, and it’s surprisingly versatile and convenient.

Did I mention the “frunk”? Open the hood and in the space that would normally be filled by a honking, gas-guzzling V6 or V8, there’s, well, nothing but a huge empty cargo area.

According to Ford, this cavernous 14.1 cubic foot cargo box can swallow a 400-pound load. To put that into context, that’s equivalent to eight 50-pound bags of cement. Add a mattress and who needs an Airbnb? 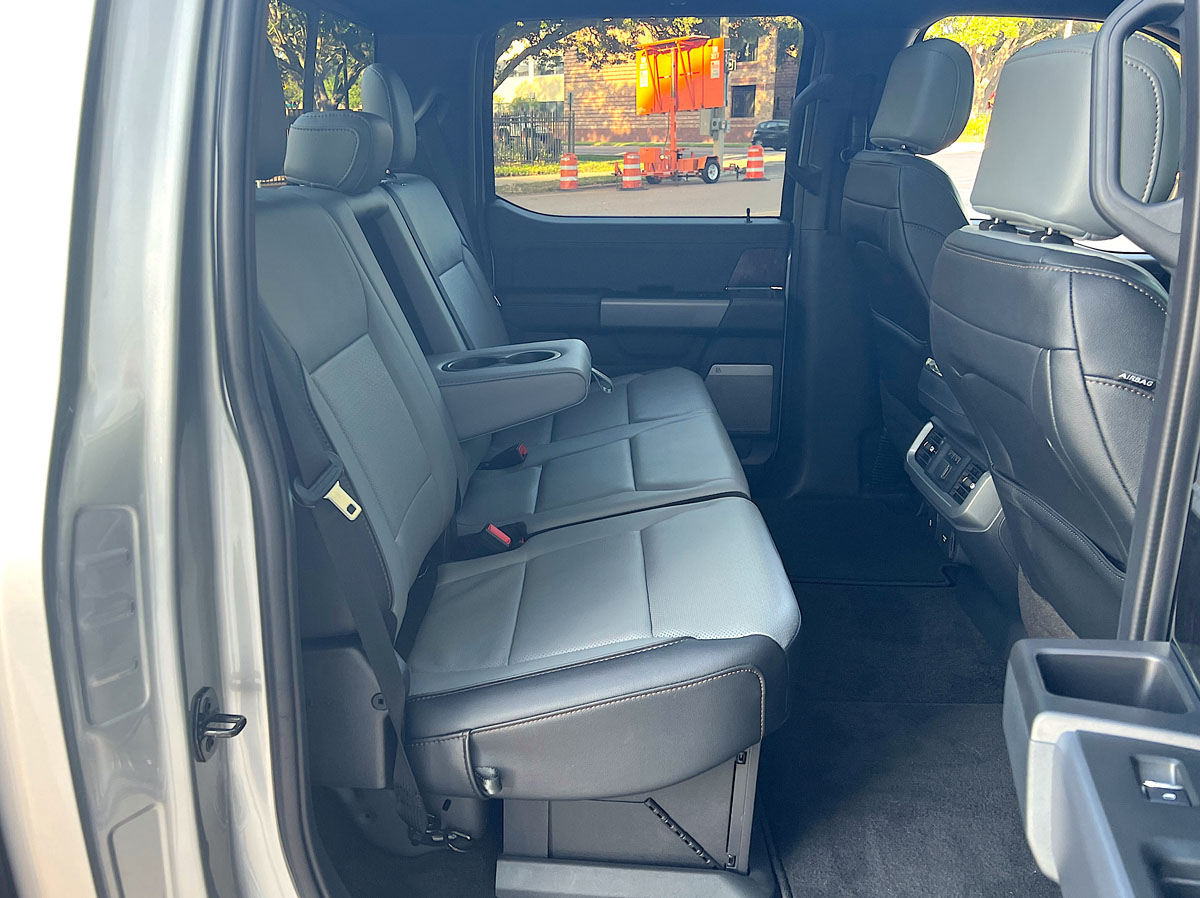 For now, all Lightnings are only available as a four-door crew cab with a short cargo bed. They have one electric motor in the front and one in the rear to give all-wheel drive, and offer that choice of either a standard 98kWh battery or a 131kWh extended-range version.

As for range, Ford claims 230 miles with the normal battery, or up to 320 miles with the extended battery. Plug it into a DC fast charger and the Lightning can cover 54 miles of electric range in 10 minutes.

For guaranteed amusement and guaranteed disbelief from any first-time passenger, simply hit the ‘gas’ when stationary. Acceleration, courtesy of 775 pound-feet of torque, is Tom Cruise out of a hauler in Superior gun, a rock from a catapult or a clown from a Ringling Brothers circus cannon. Just crazy. 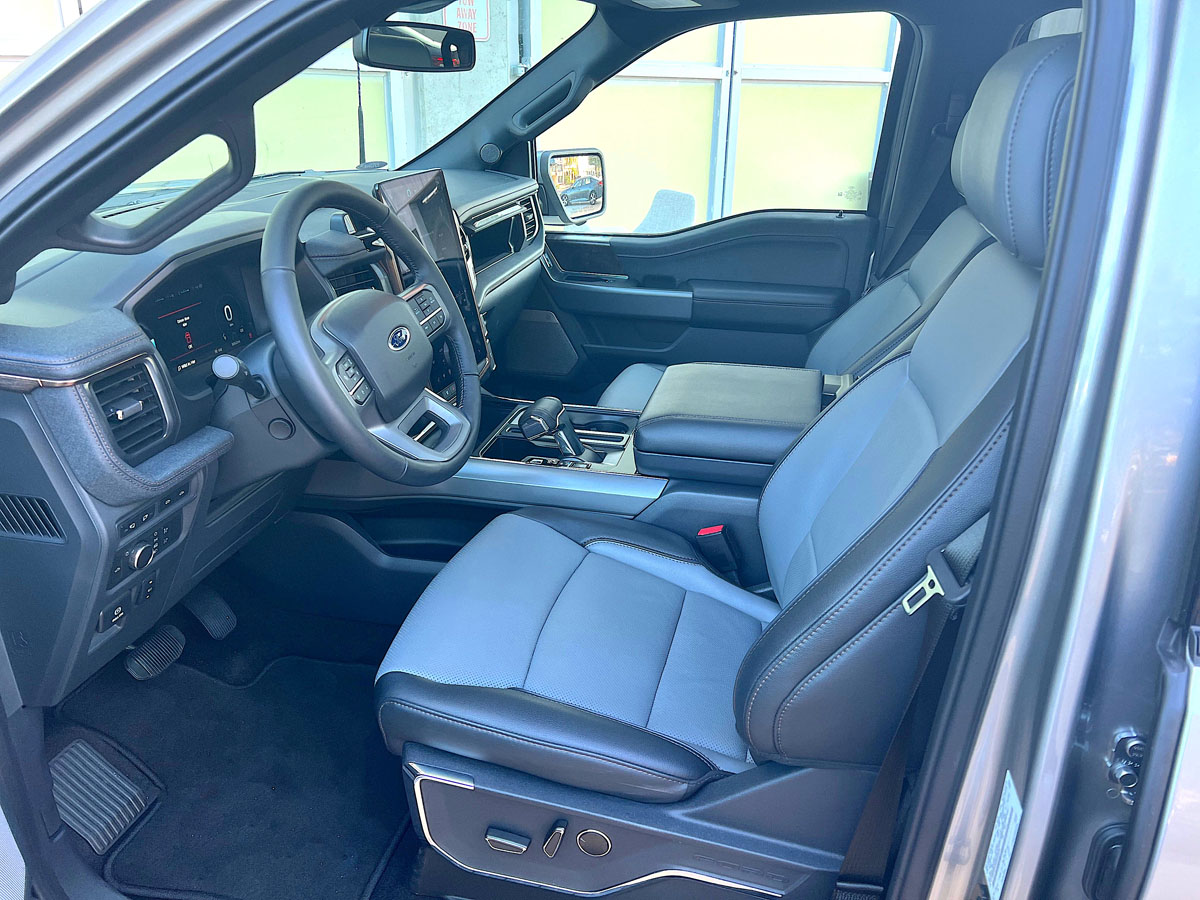 Everything about this all-electric truck is nothing short of amazing. For me, it was an eye-opener in the way it delivers on its promises.

As for powering the house in the event of a blackout? Invaluable.