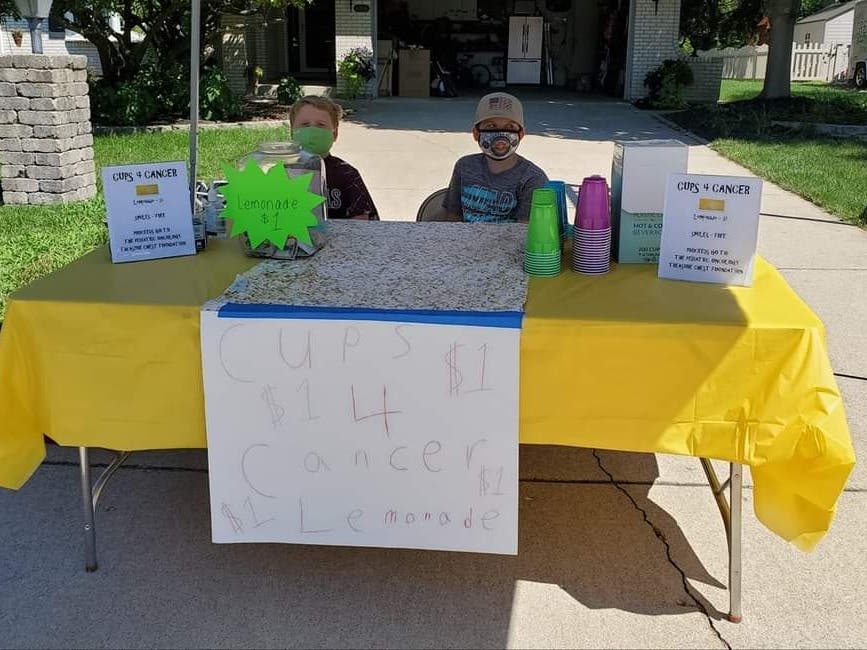 ORLAND PARK, IL – When Candice Bielski’s then 8-year-old son Austin told her in February 2018 that he wanted to organize a lemonade stand and donate the proceeds to charity, she had no way to know his idea would turn into a two-day annual event that now enjoys sponsorship from real estate agents and a donated lemonade basket.

Austin, now 11, will be hosting his fourth “Cups 4 Cancer” lemonade stand from 11 am to 3 pm daily July 20-21 in front of Bielski’s house, 12056 Lake View Drive, Orland Park. All proceeds will go to the Pediatric Oncology Treasure Chest Foundation – an Orland Park-based nonprofit that provides toys to children undergoing medical treatment, according to its website.

When Austin initially approached Bielski to organize the lemonade stand, she had considered donating her funds to Ronald McDonald House. However, mother and son found out about the Treasure Chest Foundation through Bielski’s grandmother, Dorothy Barron, who knitted hats for the foundation with her neighbors in the retirement community of Thomas House Orland Park.

“After speaking with Austin, he thought to himself, ‘I want to donate money to the Pediatric Oncology Treasure Chest Foundation,” ”Bielski said.

Austin raised over $ 100 for the foundation that year, Bielski said, and he was just getting started.

The following summer, mother and son added bottles of water, fruit skewers and sugar-free lemonade to their offerings, Bielski said, and raised more than $ 1,000.

And even the coronavirus pandemic couldn’t stop the lemonade stand. Last year, he raised more than $ 2,000 – while observing pandemic precautions, such as wearing masks and gloves while handing out pre-made lemonade cups.

“Last year we thought it was extremely important to blow the goal out of the water and have the lemonade stand,” Bielski said. “Just because COVID tried to shut down the world, we weren’t going to let it affect by trying to help children and families who need it. Unfortunately, the cancer doesn’t just stop.”

This year, Cups 4 Cancer continues to grow, both thanks to a free lemonade stand and the sponsorship of Realty Executives Elite, based in Lemont.

After the real estate group’s Christine Wilczek expressed interest in sponsoring the lemonade stand, Austin worked with the company’s graphic designer to create a keepsake mug, Bielski said. The agency then purchased 1,000 cups to use at the lemonade stand.

Realty Executives Elite has ties to the foundation because it has raised funds for it in the past, Bielski said.

Not only will this year’s lemonade stand feature the souvenir mugs, but brothers Candice, Austin, and Austin – Ethan, 13, and Colin, 8 – will serve lemonade from a cart donated to the family by a family member. local parent.

Right after last summer’s lemonade stand, the mom reached out to Bielski, asking if she’d like a cart to use on future fundraisers. When Bielski picked it up, the mother told her that her son had already benefited from the Pediatric Oncology Treasure Chest Foundation.

“It was almost like a passing of the torch,” Bielski said.