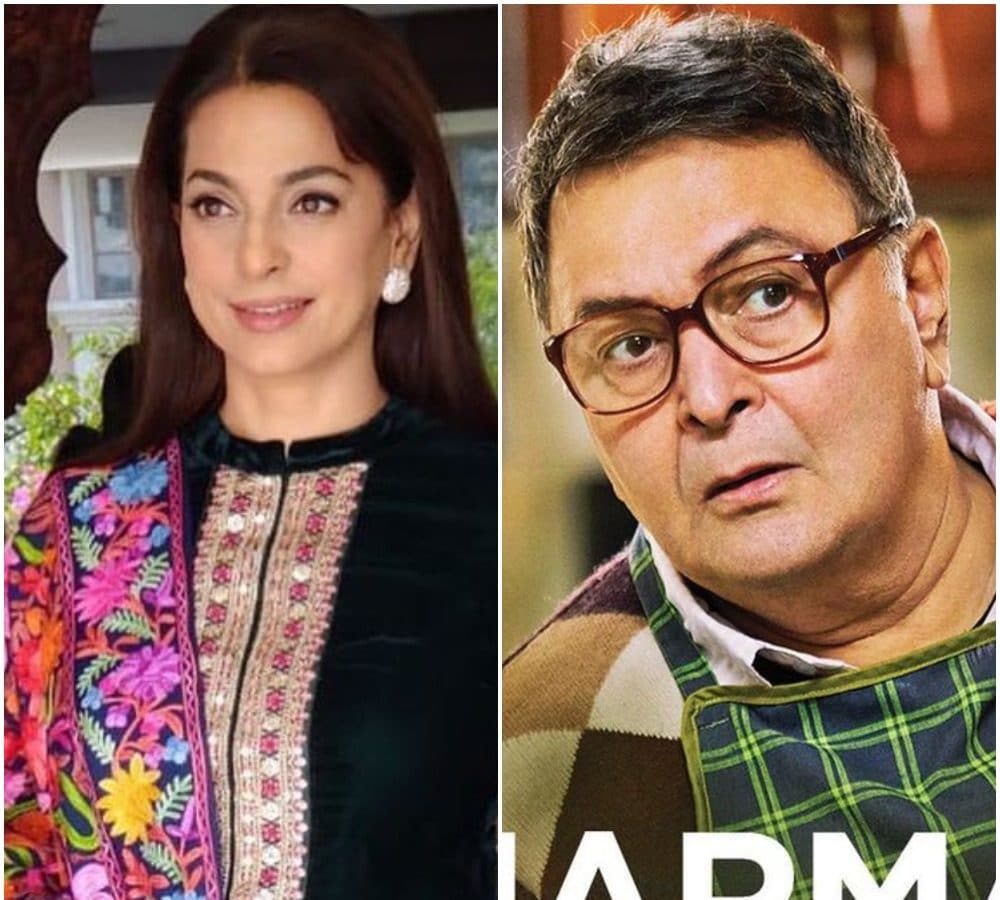 Sharmaji Namkeen was released on March 31. This is the latest film from the late actor Rishi Kapoor which also starred Juhi Chawla in a key role. During a recent interview with News18.com, the actress opened up about working with her “Chintu Ji” and revealed how “joyful and witty” he was always on set for her latest movie. The actress, who has also worked with Rishi Kapoor in several films in the past, told News18.com how the late actor would get impatient with his co-stars if they took a long time to wear makeup.

“He was always cheerful, he was witty, bright. Sometimes he got impatient and he couldn’t deal with all of us taking time out for hair and makeup. He used to say : “Kya karte rehte ho, even toh lagte ho, dekhna kya hai tum logo ko, acting karo”. He was just himself on sets, in real life and on screen. He was just Chintu Ji. Very adorable. Over the years I’ve seen him berate us all and now I find it very, very funny because we knew he was in his element when he did all of this,” Juhi said.

She further mentioned how Sharmaji Namkeen was the first time she observed Rishi Kapoor’s way of working and realized that he used to do all the scenes with such ease. “In this particular movie, I watched Chintu Ji as an actor. The way he used to give a shot. I just saw he was so good. never seen in any of my previous films because I was so caught up in my role. But it was the first time I looked at him in awe, he did it with ease. He used to be one little repetition,” she added.

Juhi Chawla also shared an adorable incident of Rishi Kapoor on Sharmaji Namkeen sets and revealed what happened when the entire cast got together for a script reading session.

“Right before Sharmaji Namkeen started filming, the director said that we had to get the whole unit together and everyone would read their part. Chintu Ji, as usual, a little grumpy, the cast had come, and everything everyone sat down to the table. Then Chintu Ji comes. He comes, sits down and says ‘I’m only here for 30 minutes, I have work, I have to go and I’m not doing this reading of script. I haven’t done this in my career. I came because Amit Ji says it’s a good exercise.’ The script reading started and he started enjoying it so much. The script reading ended, the actors left and they all went home. I was one of the last to leave. I was leaving, I would get up and leave but Chintu Ji is always there with the director. He was very, very funny and it was nice to work with him,” Juhi revealed.

“There are a lot of incidents like this in my career, a lot. I don’t know if I have that much even with Shah Rukh or Aamir because Chintu Ji was such a funny character,” the actress added.

She also shared another incident from her 2009 film with Rishi Kapoor, Luck By Chance, and said, “We were filming for Luck By Chance and normally Chintu Ji had time. Over the years I’ve seen him, he’d come in at 10 a.m., at 2 p.m. he’d pack up and leave for another shoot. There, he worked from 2 p.m. to about 9/10 p.m. He used to do these two shifts. It was settled. He couldn’t be expected to work beyond that because he had to go home. When we were working on Luck By Chance, filming started during the day and continued into the night. We know how it is during the night, everyone is starting to get tired, my staff was looking at me and I was like ‘Wait! Chintu Ji will be leaving in a while,” which means we can pack our bags too. We don’t have to say it, why should we be the bad guys on sets saying we want to go home. I don’t know what Chintu Ji was enjoying during filming that day. From 8 p.m., it continued until 10 p.m. then 11 p.m. and then it was 1 p.m. and he was on the sets. My team was rolling their eyes and saying, “Why aren’t you saying anything?” I was like, how can I say anything, there’s a senior actor who doesn’t give up and go home. All my life I had known that Chintu Ji would pack up and leave. What happened to him! He kept going on and on.”

Juhi also revealed how surprised she was when she learned that the makers of Sharmaji Namkeen were planning to finish the film after Rishi Kapoor passed away. “When Chintu Ji passed away a few weeks later, Ritesh (producer) called and he said it was his last work and we had to bring it to the screen. At that time, I was very surprised that he wanted to end this, but how, how was this going to happen. The other part of me said, whatever you say, it’s such a beautiful film and his latest work, whatever it is, I’ll be there,” she told News18.com.

Juhi further revealed how Paresh Rawal was enlisted for the film after Rishi Kapoor disappeared. She shared that the makers tried several alternatives including computer graphics before it was decided to have Paresh Rawal on board.

“At that time, they didn’t know what to do. He had mentioned that maybe we would do computer graphics because now things have gotten so advanced that you can actually use the actor’s face and expressions and recreate the movie. I think they tried a lot of things, a lot of options, worked on it and it was a few months later that they called back and said we were going to go ahead and Paresh Ji would play the role. There’s a movie in Hollywood where one of the main actors died and the rest were played by another actor and it was a hit. So, taking some hope and aspiration from there, we went back to the sets and finished the movie,” she revealed.

When asked what makes Sharmaji Namkeen special, an emotional Juhi said, “I wish Chintu Ji was there throughout the movie. What makes it memorable is that it is his last work. There won’t be another Rishi Kapoor movie after that and then that realization that I was there on set when he was doing his last job, I was there in the scene.”