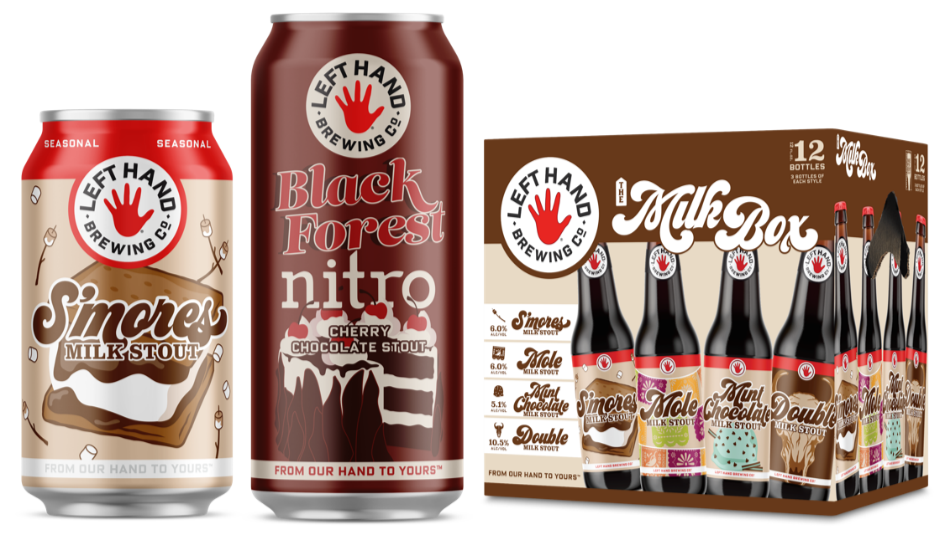 LONGMONT, Col. – Left Hand Brewing Company, renowned for its stouts and leader in Nitro technology, is going “All Out for Stout” this season with three new releases. The independent craft brewery is launching two seasonal stouts for a limited time, S’mores Milk Stout and Black Forest Nitro Cherry Chocolate Stout. After a very successful debut in 2020, Left Hand is also bringing back The Milk Box strain pack with a brand new line of four different milk stouts. To celebrate these new brands, Left Hand is giving away custom Meier snowboards to four lucky winners of the competition.

At 6.0% ABV, S’mores Milk Stout is your favorite campfire treat for all adults. “We’ve done a lot of testing for the S’mores Milk Stout,” said Jeff Joslin, director of brewing operations at Left Hand. “Our brewers chose a single cereal bill to display graham crackers. We used Cholaca liquid cocoa because it gave the best chocolate flavor, rich mouthfeel and authenticity of the ingredients. These ingredients are all paired with toasted marshmallow to create the perfect liquid s’more.

Black Forest Nitro is inspired by the famous German chocolate and cherry cake. “This beer is a real treat and weighs 7.7% blood alcohol,” said Jill Preston, director of marketing and hospitality at Left Hand. “In one of my favorite box designs, you get a glimpse of the tangy black cherries and rich chocolate cake aromas that emerge from this dark beer. To top it off, it’s on Nitro. All of these flavors cascade over a web of millions of tiny bubbles. Each sip ends with decadence and our signature ultra smooth palate.

In addition to these seasonal packages, Left Hand is releasing the second version of its fall / winter variety pack: The Milk Box. The pure milk chocolate bliss of their classic Milk Stout is richly reinvented in four different ways. In addition to the inclusion of S’mores Milk Stout, fans of their famous stout can now savor the spice blend of Mole Milk Stout, cool off with the refreshing Mint Chocolate Milk Stout and bask in decadence with Double Milk. Stout. “Our fans keep telling us they want more Milk Stout,” said Jason Ingram, National Sales Manager at Left Hand. “We are listening to you and bringing back this variety pack. While last year we showcased a few comeback styles, this year we’re proud to release The Milk Box with a whole new lineup of four entirely new beers.

“We’ve had countless ideas for Milk Stout riffs over the years, and now we can play with them,” Joslin said. “These four are the ones that thrill the whole brewery the most, and they complement each other so well!”

In addition to the new range, Left Hand has also moved this packaging to bottles for 2021. “As we continue to navigate through the national shortage of aluminum cans, we are making strategic decisions on packaging,” said Ingram. The Milk Box was one of our most successful releases of the past year, and we had to double production to keep up with demand. With the reliability of glass, we knew it was the right choice to switch to bottles for 2021. ”

Along with their outings, Left Hand is encouraging fans to enter a raffle to win a custom-designed Meier snowboard. “What better way to do ‘All Out for Stout’ than to go all out with one of our Artist Series snowboards? Said Preston. “The snowboard is designed by Left Hand graphic designer Carly Igoe, and they have that edgy, whimsical feel in a comic-inspired layout. They really match the energy and vibe of the sport, and four lucky winners will take them home! »Winners can enter using a QR code displayed at retail stores across the country or enter online here.

S’mores Milk Stout is available in boxes of 6 x 12 oz cans and on tap. Black Forest Nitro can be purchased in packs of 4 x 13.65 oz cans and on tap. The Milk Box includes twelve 12 oz bottles, 3 beers of each style, and each style is available in limited quantities on tap. Check out the Left Hand beer locator for locations closest to you, as these brands will be on sale throughout October.

Left Hand Brewing Company, founded in Longmont, Colorado, is one of the pioneers of craft brewing. From a humble homebrew kit beginning to become one of America’s 50 Best Craft Breweries, Left Hand has continued to grow and innovate throughout its 28 year history. Famous for our Nitro series, Left Hand launched the original Nitro bottle in the United States with our flagship product Milk Stout Nitro and the first production series of Nitro widget boxes made in the United States. We are proud to be one of Colorado’s most honored and recognized breweries with 29 Great American Beer Festival medals, 11 World Beer Cup awards, and 9 European Beer Star awards. Our collection of year-round and seasonal beers is available in 45 states, DC and internationally. For more information, please visit www.lefthandbrewing.com.