A dinosaur is shown on screen during a press tour of Vive Studio’s virtual production studio in Gonjiam, Gyeonggi on Friday. [YOON SO-YEON]

GONJIAM, Gyeonggi – A T-Rex in a mountain valley roars in front of the audience. The next minute, an astronaut sits alone on a rock on Mars, gazing at a calm landscape. In the blink of an eye, the audience is taken to a nighttime view of the Seoul skyline.

Time and space are no longer constraints for filmmakers in a virtual production studio created by Vive Studios, a local special visual effects (VFX) company founded in 2003 and specializing in virtual reality (VR) content and computer generated images (CGI).

The company provided its VR and CGI capabilities for a concert by BTS’s Suga during the 2020 Mnet Asian Music Awards, for the 3D modeling of presidential candidates on JTBC during the March election, and for the VR movie “Volt.”

The Gonjiam Virtual Production set in Gyeonggi is part of this effort. The 1,157 square meter (12,454 square foot) site is a virtual on-set production set where producers and actors can view the computer-generated background in real time.

Virtual production has become increasingly popular in recent years, especially during the pandemic, as it reduces the time and cost of shooting compared to the green screen process, where footage is added later. Because directors can instantly see how the scene is filmed, the time needed to reshoot or edit is reduced. 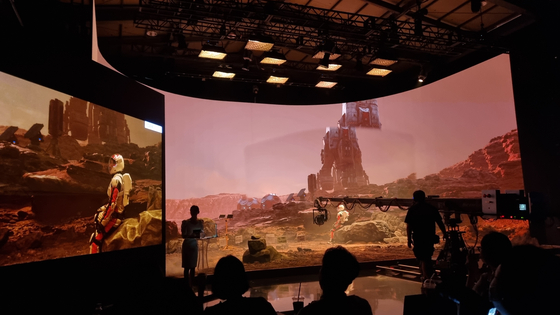 A scene from Mars is shown on screen during a press tour of Vive Studio’s virtual production studio in Gonjiam, Gyeonggi on Friday. [YOON SO-YEON] 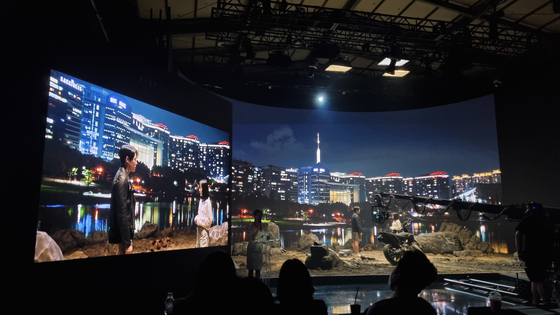 A scene from Seoul at night is shown on screen during a press tour of Vive Studio’s virtual production studio in Gonjiam, Gyeonggi on Friday. [YOON SO-YEON]

“We believe this is one of the technologies that will take us into the future,” Vive Studios CEO Stanley Kim said during a press tour of the studio on Friday.

“Major players such as Disney and Netflix are infiltrating the Korean market, because it’s the Asian hub of the content market. I think all Asian content will revolve around Korea, and that’s where production sets private like us come into play.”

On the day of the protest, reporters were taken to an empty production set with some rocks and dirt against a round-shaped screen panel displaying a rocky valley. The landscape changed with the movements of the camera, retransmitted on a television screen next to the set.

Soon, a T-Rex appeared on the TV screen as the actual set remained empty.

Vive Studios introduced an integrated control system that allows shooting and editing graphics at the same time. Dubbed Vive Studios Immersive Technology (VIT), producers can control the lighting and camera to instantly adapt to graphics changes, such as time and background location.

“We plan to make VIT commercially available for other companies by early next year,” said Lee Kwang-hee, chief technology officer of Vive Studios and head of Viv Lab, a center for research within the company. 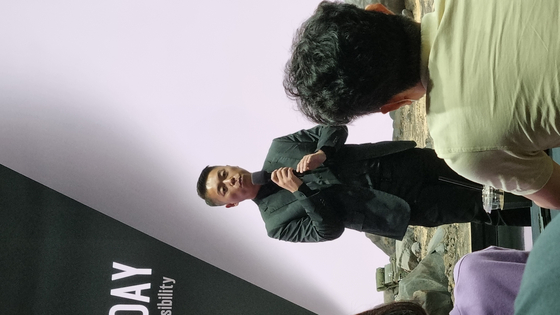 “Viv Lab was founded in January this year with around 20 researchers working not only on visual effects, CGI, but also other forms of technological art and virtual production to maximize efficiency and quality content.”

Vive Studio’s next focus is on virtual humans. The company launched JZ, its virtual celebrity, in April using high-resolution face swapping technology, where the company shoots various videos using a real actor and replaces the face with CGI technology.

The company plans to develop technology that reduces the time it takes to create a 3D human model, which is typically around three weeks, to just five minutes. In addition to tech, CEO Kim has a big theme park in mind filled with all things tech and the metaverse.

“Ultimately, we plan to become a paradigm-shifting company that can populate a metaverse platform created using our technology,” Kim said.

“I hope to one day build a theme park filled with the technology we’ll see in the next 30 to 50 years, like humanoids, drones, and holograms. It’ll be more like a blueprint of the future city rather than a amusement park like Disney Land or Universal Studio.”