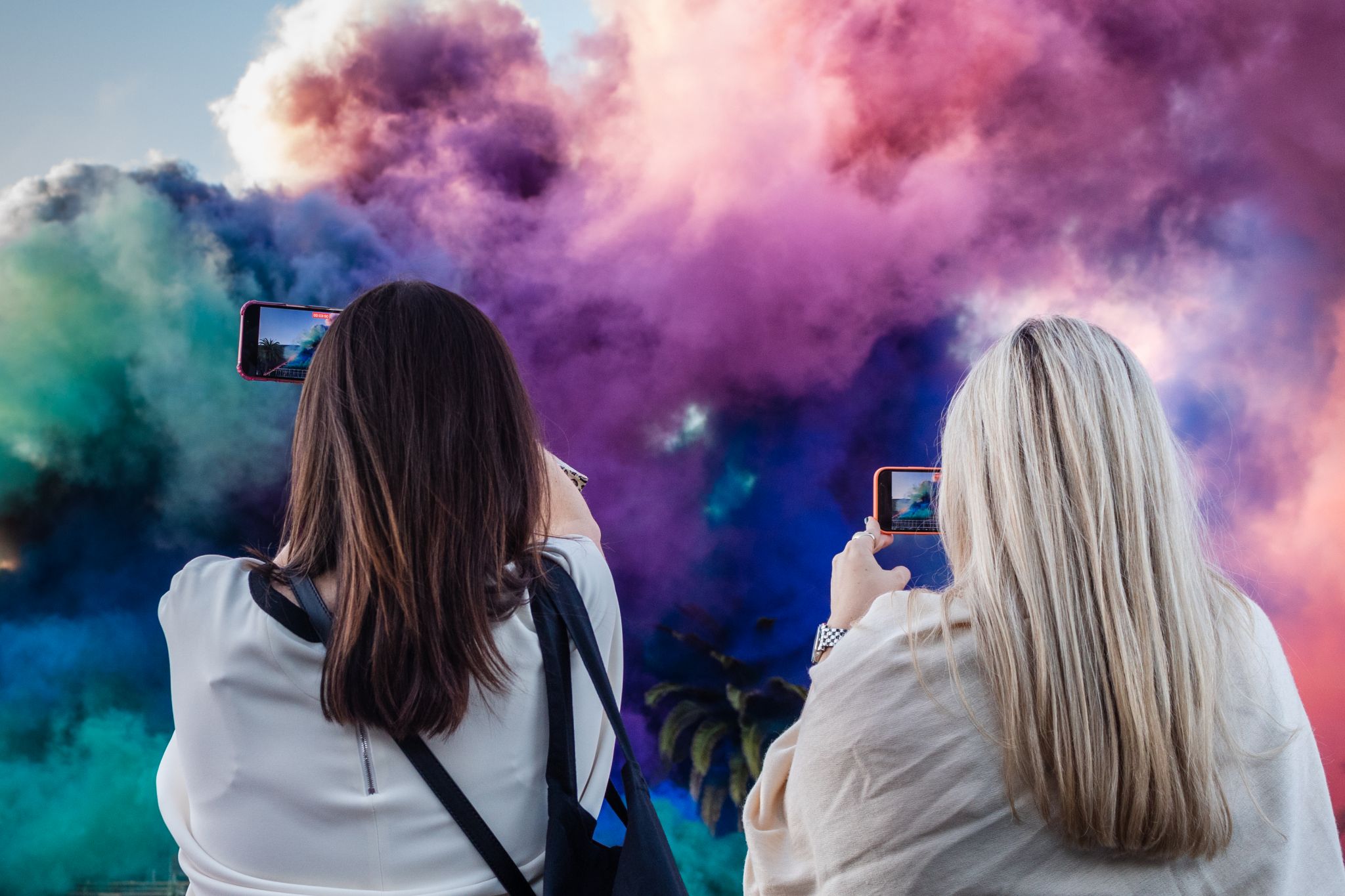 Massive clouds of non-toxic smoke erupted over Golden Gate Park’s Music Concourse on Saturday night, sending colored plumes high in the sky that floated up to the Ferris wheel.

The massive venture was founded by 82-year-old artist Judy Chicago, whose retrospective is on view at the de Young Museum through January 9. Entitled “Forever de Young”, Chicago has been planning the piece for two years, but it has been mixing color in the air since the 1960s. “Forever de Young” is one of the greatest pieces the artist has ever had. carried out.

Hundreds of people, young and old alike, gathered in front of the de Young to witness the unveiling of the play. They stood with their phones ready and their masks, unsure of what to expect from the giant scaffolding in front of them.

“The artist and the environment become collaborators in a somewhat unpredictable experience,” said Claudia Schmuckli, curator in charge of contemporary art and programming at the Fine Arts Museums of San Francisco, in a speech before the performance .

Chicago slightly prepared the crowd for what they were about to experience in a pre-recorded speech. Chicago herself, with shiny purple hair, was also in attendance on Saturday night, and fans and paparazzi followed her as the true star of the art world she has become.

“What you will see is a slow, multi-stage unveiling and display of colors, which will be mixed in the air,” she said.

According to the performance ratings, the piece is part of a long line of other smoke-based performances, which Chicago calls “Atmospheres.” “Chicago’s engagements with the landscape offered a vision for the future, which was fleeting, luminous and distinctly feminine,” the notes read.

After remarks, the crowd eagerly awaited the start of the show, which they did at 6:45 p.m. sharp. A series of red flares lit up the scaffolding before huge clouds of smoke began to emerge, mixing their pinks, purples and blues with the clear sky above.

Within minutes, especially to the right of the scaffolding, the wind blew the smoke off the crowd, along with its distinct smell of sulfur. The smoke obscured the sunlight, darkened the sky, and drifted above passers-by like a breaking wave to which many participants succinctly exclaimed, “Whoa!” Almost everyone was holding their cell phones up in the air, eager to capture the spectacular scene.

“It smells like a barbecue just arrived,” remarked a child in the crowd.

“It’s good that we are all wearing face masks,” said another man.

One woman called it a “giant campfire”.

Public reactions were mixed. Amira Budman, 4, who spoke between handfuls of blackberries, said the experience was “frightening.”

Even some adults felt slightly baffled. Brent Couchman, a graphic designer, said: “It was cool, but we didn’t know we were going to be in, which was kind of interesting… You kind of felt in this wonderful, partly toxic living.”

He said the large white clouds at the start reminded him of images of 9/11.

Ginerva Held, an artist, said the experience reminded her of wildfire season in California.

“At first, after going through the wildfires, it was a bit disconcerting, the smoke on your face,” she said. “But then, seeing when the smoke is gone and you got these color combinations… well, I guess the drone had the best view.”

She noted that it was “exciting to be a part of such an experience,” especially one that celebrates the long underestimated and under-recognized Chicago.

“It’s great to celebrate a female artist with other San Franciscans,” said Held. “It’s good that we can all be here and enjoy a public performance together.”

“Judy Chicago: A Retrospective” is on view at de Young through January 9.