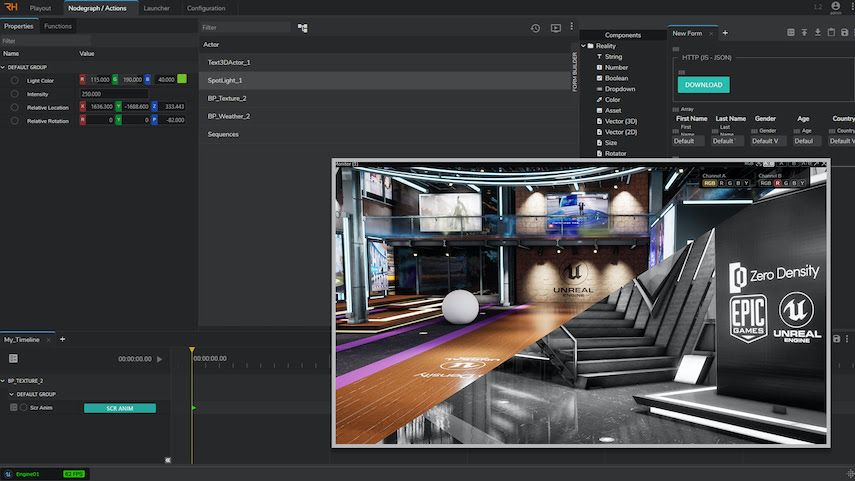 IZMIR from Turkey—Zero Density unveiled RealityHub 1.2, a massive update to its production software that allows broadcasters to manage everything from real-time graphics to robotic cameras, all in one place with a web browser.

With the upgrade, users can integrate most equipment, automation systems, and external data sources into RealityHub right out of the box, or simply take advantage of Zero Density’s open source SDK to develop their own. Custom integrations, the company said.

“In a single application, RealityHub gives our users the ability to configure, compile, launch and distribute projects, while providing time-saving ways to optimize their workflow,” said Andrew Maloof, senior graphics systems engineer. at The Weather Channel. “Centralizing these tools in an intuitive and easily accessible web interface is a game-changer for our artists, engineers and graphic operators. “

Combined with the capabilities of Reality Engine for virtual studios and broadcast graphics, the new version of RealityHub will allow broadcasters to use Unreal Engine directly and quickly from the same platform they use to manage everything else in their studio.

“RealityHub was designed to help clients like The Weather Channel, Warner Media and Eurosport by integrating traditional stand-alone control systems into a web browser,” said Kuban Altan, Co-Founder and Vice President of R&D at Zero Density . “This allows teams to manage all delivery configurations without having to worry about lengthy setup processes. With RealityHub 1.2’s Unreal Engine Vanilla support, we are now ushering in a future where RealityHub technology is more accessible than ever before, empowering Unreal Engine creatives in broadcasting, education, live events, and every other industry with the power to control every element of their production from a single hub.

Other key benefits, according to zero density, include:

The Community Edition of RealityHub 1.2 will be available for free download before the end of 2021. For version updates, visit www.zerodensity.tv/products/reality-hub.